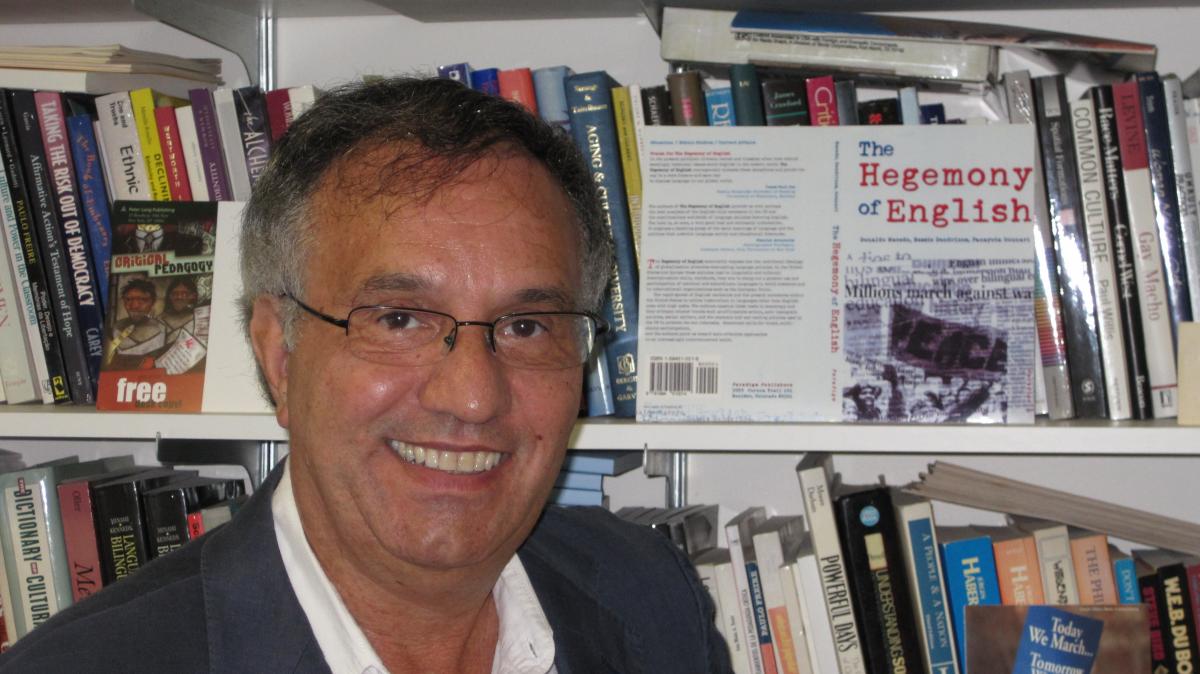 Donaldo Macedo is a professor of English and a Distinguished Professor of Liberal Arts and Education at the University of Massachusetts Boston. A critical theorist, linguist, and expert on literacy and education studies, Macedo is the founder and former chair of the Applied Linguistics Master of Arts Program at the University of Massachusetts Boston.

Macedo has been a central figure in the field of critical pedagogy for more than 30 years. His work with Paulo Freire broke new theoretical ground, as it helped to develop a critical understanding of the ways in which language, power, and culture contribute to the positioning and formation of human experience and learning.  Macedo was Freire’s chief translator and English language interpreter.  His published dialogues with Paulo Freire are considered classic works not only for their elucidation of Freire’s theories of literacy but also for adding a more critical and theoretically advanced dimension to the study of literacy and critical pedagogy. Macedo’s and Freire’s coauthored book, Literacy: Reading the World and the Word, is central to Critical Literacy in that it redefines the very nature and terrain of literacy and Critical Pedagogy.

Donaldo Macedo has more than one hundred publications that include articles, books, and book chapters in the areas of linguistics, critical literacy, and multicultural education. His publications include Literacy: Reading the Word and the World (with Paulo Freire, 1987), Literacies of Power: What Americans Are Not Allowed to Know (1994), Dancing with Bigotry (with Lilia Bartolomé, 1999), Critical Education in the New Information Age (with Paulo Freire, Henry Giroux, and Paul Willis, 1999), Chomsky on Miseducation (with Noam Chomsky, 2000), Howard Zinn on Democratic Education (with Howard Zinn, 2005), and Imposed Democracy: Dialogues with Noam Chomsky and Paulo Freire (2012).

In 2003, Macedo was named a member of the Laureate Chapter of Kappa Delta Pi—International Society in Education, one of the world’s most prestigious awards in education. Past recipients of this award include Albert Einstein (1950), Walter Lippman (1960), Margaret Mead (1962), Charles E. Skinner (1966), and Jean Piaget (1974). The award recognizes Macedo’s scholarly contributions over the years and the influence his work has had both in the United States and abroad.

Dr. Frances R. Aparicio is professor of Spanish and Portuguese and director of the Latina and Latino Studies Program at Northwestern University. She has previously taught at Stanford University, University of Arizona, University of Michigan, and University of Illinois at Chicago. Her research interests include Latina and Latino literary and cultural studies, the cultural politics of U.S. Latino/a languages, Latino/a popular music and dance, literary and cultural translation, cultural hybridity, transnationalism, Latinidad, and mixed Latino/a identities. She is author of the award-winning Listening to Salsa: Gender, Latin Popular Music and Puerto Rican Cultures (Wesleyan 1998), and co-editor of various critical anthologies, including Tropicalizations: Transcultural Representations of Latinidad (University of New England Press, 1997), Musical Migrations (Palgrave, 2003), and Hibridismos culturales (Revista Iberoamericana, 2006). A founding editor of the Latinos in Chicago and the Midwest Book Series at the University of Illinois Press, she has facilitated and fostered book publications and new research on Latino/as in the Midwest. She is currently writing on “intralatino/a subjects,” individuals who are of two or more national Latin American origins, and on Marc Anthony and salsa romantica. 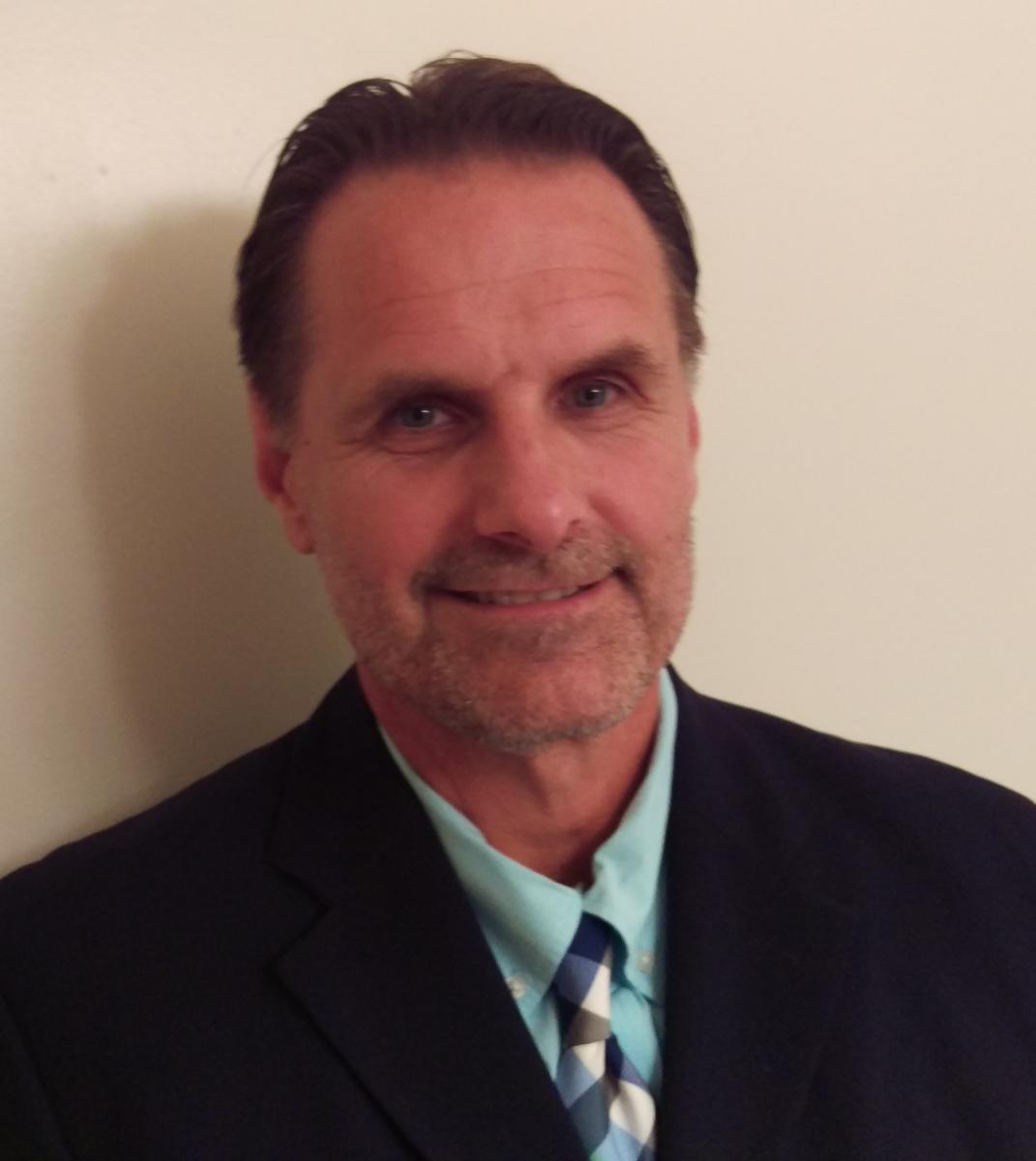 Dr. James D. Kirylo is associate professor of education at the University of South Carolina. His work intersects critical pedagogy, spirituality, liberation theology, and curriculum theorizing in an effort toward advocating for a more just, equitable, and appropriate education for all.

Kirylo’s most recent book (with Drick Boyd) is titled Paulo Freire: His Faith, Spirituality, and Theology (Sense, 2017). In the foreword of the text, Ana Maria (Nita) Araújo Freire writes, “I can without fear assure that much will be learned by the reader from all three: a European-born, James; a North American, Drick; and a Brazilian from the “terras quentes” and refreshing breezes of the Nordeste, from Recife, the beloved city of my unforgettable husband Paulo who, through his genius and humility, illuminated the making of this book.”

In addition to the writing of book chapters and numerous articles that appear in such journals as the Journal of Curriculum Theorizing, Journal of Curriculum and Pedagogy, Journal of Research on Christian Education, Policy Futures in Education, and Childhood Education, Kirylo’s books include Teaching with Purpose: An Inquiry into the Who, Why, and How We Teach (Rowman & Littlefield, 2016), A Critical Pedagogy of Resistance:  34 Pedagogues We Need to Know (Sense, 2013), and Paulo Freire: The Man from Recife  New York (Peter Lang, 2011), among others.

Kirylo resides in Columbia, South Carolina with his wife, Anette, and two sons, Antonio and Alexander. 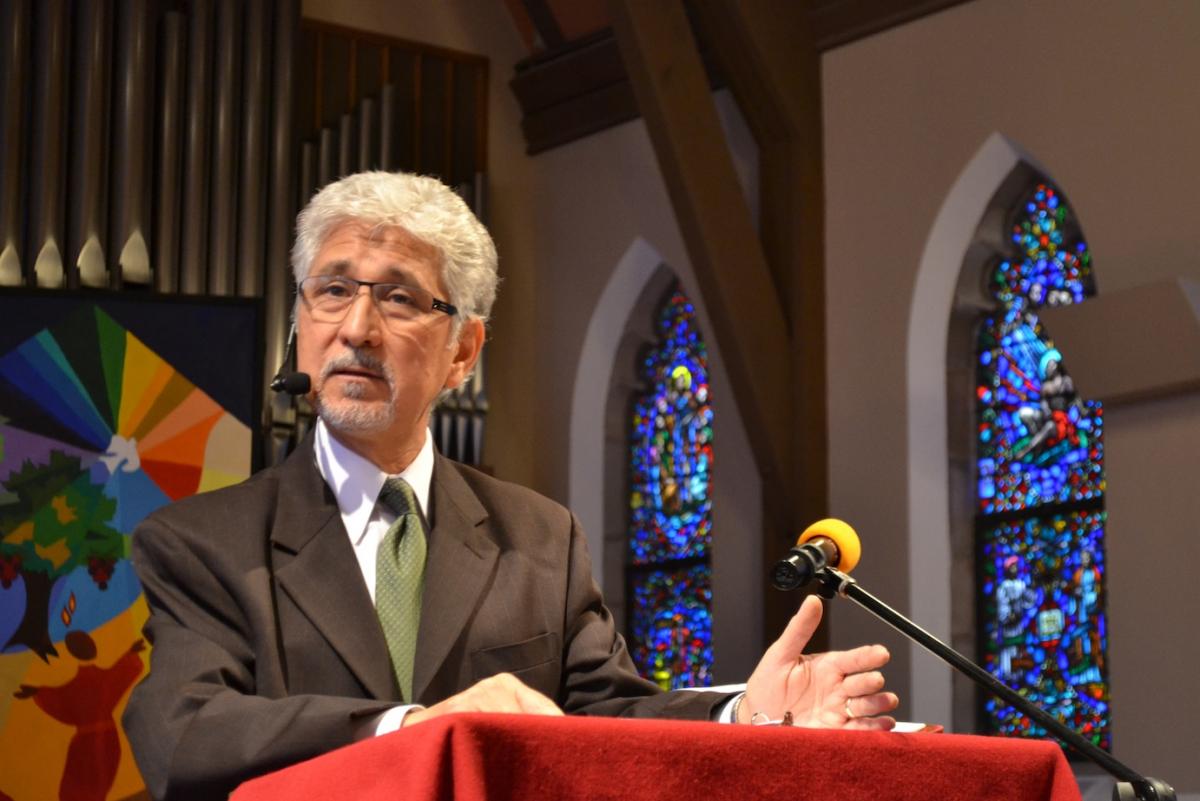 Born in Azul, Argentina, on October 29, 1950, Dr. Osvaldo Vena attended the Buenos Aires Bible Institute of the Christian and Missionary Alliance from where he graduated in 1975 with a Th.B. He came to the U.S. in August of 1976 to attend Bethel Theological Seminary in St. Paul, Minnesota, where he obtained a M.Div in 1980. During his time at Bethel, he served as a minister in an independent Hispanic congregation in Minneapolis.

In 1980 he entered Princeton Theological Seminary, from where he graduated in 1981 with a Th.M. Back in Argentina he was ordained in 1985 by the Reformed Church and was appointed to serve in two different congregations of the Presbyterian Church, first as interim minister and later as senior pastor. From 1983 to 1989 he completed his Th.D. in ISEDET (Instituto Superior de Estudios Teológicos) in Buenos Aires. Invited by the Church of Scotland, he spent nine months in New College, University of Edinburgh, doing post-doctoral research.

From Scotland he came to the U.S. where he served as an interim minister in a UCC congregation in Joliet, Illinois and as a bilingual teacher in two different school districts in the Chicago area. He was called in 1995 to Garrett-Evangelical Theological Seminary as an assistant professor of New Testament Interpretation and director of the then Center of Hispanic Ministries. He was promoted to associate professor in June of 2000 and granted tenure in October of 2001. In May of 2010 he was promoted to the rank of Full Professor.

Apart from many articles and essays, written both in English and Spanish, he has published numerous books including The Parousia and Its Rereadings. The Development of the Eschatological Consciousness in the Writings of the New Testament, Peter Lang, 2001, Apocalipsis (Revelation) (Augsburg Fortress, 2008), Evangelio de Marcos: Comentario para Exegesis y Traducción (Mark: A Commentary for Exegesis and Translation) (United Bible Societies, 2008), and Jesus, Disciple of the Kingdom. Mark’s Christology for a Community in Crisis (Eugene, Oregon: Pickwick Publications, 2014).